Every year we throw open our doors to celebrate St Ethelburga’s Feast Day with friends and neighbours.  At this year’s service a warm and poignant address was given by Revd Dave Tomlinson.

“Ethelburga left behind no great treatise on Christian doctrine…but a legacy of compassion and social justice.  Actually, this very place is testament to that kind of faith: a faith that weeps at the brokenness of our world but also sets about rebuilding the ruins, picking up the shards…and repairing the heart and soul of who we are called to be as human beings.” 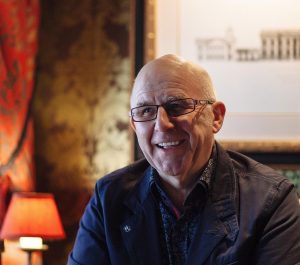 “Once a month for five years I made the short pilgrimage on the District Line to Upminster to take part in an interfaith forum. It was held in the Coopers Company and Coborn School – whose very apt mission statement reads: ‘Love as Brethren. Encourage Learning’. It’s a fantastic motto for a school….and provided a perfect backdrop for an interfaith discussion in which we did indeed love as brethren and encourage learning.

The then head of RE organised the forum, which attracted a healthy handful of sixth-formers from the school and a variety of members of local faith communities. The regular panel consisted of a Buddhist, a reform Jew, a Muslim imam and me – on occasions, also a humanist and a pagan.

Probably our least productive, least satisfying discussions were when we ended up arguing about different theologies or doctrines. Don’t get me wrong: I can happily argue about such things until kingdom come (or not!), but mostly what this approach does is highlight our differences (which are important but not supremely important). Our best (most rewarding) discussions focused on experience – what our beliefs or religious traditions actually do for us, and if or how they might make the world a better place. 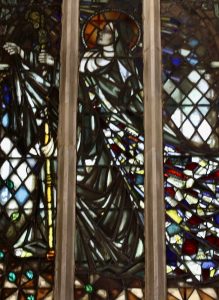 I like the description of Saint Ethelburga on the website which portrays Ethelburga as ‘a strong woman who exemplifies the virtues of leadership and commitment to social action even to the point of self-sacrifice.’ It would

be anachronistic to describe a seventh century woman as a feminist, yet when she refused to enter an arranged marriage and paid a price for that, she refused to be defined by a patriarchal system and affirmed the value of her own will and identity, making her a worthy ancestor to modern feminism.

Most of all, I love Ethelburga for her spirit, for sensing of who and what God wanted her to be and hanging onto that. For her, following the will of God was primarily about being a particular sort of person – it was more about who she was than what she did. It was about a way of being in the world, from which the details of choice of path inevitably followed. She was certainly someone who left the world a better place for her having been here.

Micah lived nearly a thousand years before Ethelburga, but he too understood that religion is primarily a way of being in the world, not necessarily about right doctrine or ritual. Speaking to people caught up with forms of worship, who imagined that this was what made them distinctive and pleasing to God, which made them God’s people, Micah like the other prophets proclaimed God’s disinterest in religious words and ritual, stating in no uncertain terms that what God requires is for people: ‘to do justice, and to love kindness, and to walk humbly with God.’

If our discussions at the interfaith forum showed anything to me, it was that beyond all the window-dressing of different beliefs and rituals, what lies at the core of all faith traditions is the understanding that being authentically religious – being authentically human – means to live in a particular way: the way of justice for all, the way of kindness or compassion, the way of setting aside of ego, to commit to serving instead of simply being served.

I happily describe myself as both a Christian and a humanist. I see no inherent conflict between the two things. Indeed, I am convinced that Christianity is intrinsically humanistic, especially when viewed through the lens of Jesus of Nazareth and his teachings, especially the golden rule: ‘do unto others as you would have them do unto you.’

Some form of this rule appears in every religious tradition. But it’s not just about religion: all of us, religious or not, knows that this is the right way to behave; it’s written into our very humanity.

But for me as a Christian, my notion of humanism is firmly grounded in what Jesus called the kingdom of God, especially in his elucidation of this in the sermon on the mount. The kingdom of God is not a code of ethics or a detailed programme of action, but the promise of a humane world when we rediscover the heart of God in the depths of humanity and set about building our lives and communities around that.

Of course, Christians do not have a monopoly on this. A similar concept to the kingdom of God exists in the Jewish ethic of tikkun olam which literally means ‘repair the world’. During the 16th century, in the Galilean village of Tsefat, Rabbi Isaac Luria observed that the world had many things wrong. There was hunger, war, disease and hatred. ‘How could God allow such things?’ people wondered. ‘Perhaps it is because God needs our help’, Luria responded. And he explained his answer with the following mystical legend.

When the world was first made, God planned to pour light into everything to make it real and alive. But something went wrong. The light was so bright that the vessels containing it burst, shattering into millions of broken pieces. Our world is such a mess because it is filled with broken fragments. When people fight and hurt each other, they allow the world to stay shattered. ‘We live in cosmic heap of broken pieces, and God cannot fix it alone’, Luria said.

And that is why God created us and gave us freedom of choice. We are free to do whatever we choose with the world. We can allow them to remain broken or we can join with God in repairing the mess. We can call it tikkun olam, as Rabbi Luria did, or the kingdom of God, or Christ-inspired humanism, our task remains the same: to share a co-responsibility with God and each other to bring healing and wholeness to the world.

Ethelburga saw the broken shards in the effects of the plague that ravaged lives all around. Instead of running away to avoid the disease, she and her sisters chose 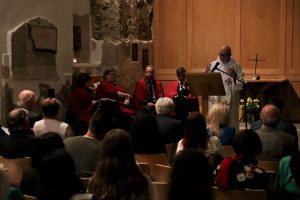 to care for the sick and eventually died in the process, but not before helping to repair broken spirits with comfort and kindness.

One of my pleasures in life is going into schools, talking to young people. In one class I introduced the grand idea of a ‘global ethic’ – the search for a set of principles that people of all faiths and none can share in common and pursue with passionate commitment.

One young man asked, ‘But what can we do to make a difference?’ A fellow student replied that we can do small things to help: support humane causes through online campaigns, do sponsorships for charitable projects, stand up to bullies, help elderly neighbours, buy things that are fairly-traded, stop using unnecessary plastic.

Next thing, the whole class was buzzing with questions and suggestions. And I went home, impressed, as I mostly am in such encounters with young people by the way they are prepared to engage seriously with such issues. Most of all, I felt inspired by their eagerness to make modest, practical changes.

It’s easy to succumb to a culture of resignation – to a sense of helplessness that we can make a difference in the world. It’s young people who restore my hope for the future: who remind me that I can alter things a bit if I am only willing to make the effort instead of handing the responsibility to those I see as more powerful.

A few years ago I wrote a book called How To Be A Bad Christian – And A Better Human Being, which basically asked: what happens when we treat the Christian faith as a spiritual practice instead of a belief system… when it’s about finding what God wants for our world and then throwing ourselves into helping to make that happen.

In other words, I think that the word ‘Christian’ is much better thought of as a verb than a noun. Jesus didn’t call people to wear a badge, to join a club. He called them to follow him: to join him in spreading love and healing in the world. When we treat ‘Christian’ as a verb – as a way of life – instead of a noun, it changes everything. We stop saying ‘I am a Christian’, and start looking at how we can behave in Christian ways.

That’s what Ethelburga teaches me too; she left behind no great treatise on Christian doctrine…but a legacy of compassion and social justice.  Actually, this very place is testament to that kind of faith: a faith that weeps at the brokenness of our world but also sets about rebuilding the ruins, picking up the shards…and repairing the heart and soul of who we are called to be as human beings.”

About Dave Tomlinson.  Dave is a writer and Church of England priest – a fervent proponent of progressive Christian theology and practice. His books include The Post-Evangelical, How To Be a Bad Christian (and a better human being), and Black Sheep and Prodigals (an antidote to black and white religion). Dave also regularly contributes to BBC Radio 2’s ‘Pause for Thought’ on the Chris Evans Breakfast Show. And along with his wife Pat, he co-founded Holy Joes, a church in a pub. Described as a ‘liberal evangelist’ Dave’s passion is to make faith humane, and accessible to the non-religious – and to see Liverpool Football Club rule the world!

Jo brings a wealth of experience from over twenty years co-ordinating projects in the fields of interfaith, social justice and social care in the non-governmental sector. During the winter of 2015/16 she and other members of the St Ethelburga staff team volunteered on the Greek island of Lesbos; an experience that inspired the co-creation of the programme, People of the Earth. She holds a Diploma in group facilitation, conflict resolution and counselling (NAOS) and is a graduate of the International School of Storytelling. She is a current Trustee of The Forgiveness Project.