Holding together, falling apart: reflections on the Radical Resilience programme

Six months since we launched the Radical Resilience series, and the world has changed beyond recognition. ‘Join us to explore adaptive and regenerative responses to climate emergency, ‘ was our invitation, and 16 extraordinary community leaders came together in response.  At our opening retreat we explored the 4 Rs of deep adaptation, asking, what can we relinquish, restore, reconcile with, and how can we grow our resilience?  We stripped away our defences and faced the truth of what climate-induced social collapse could mean for our families and communities. Doing this together felt like spiritual work. It took us to places of honesty and risk that surprised us.  There was a sense of relief, at having faced our fears and grief together. At dinner on the second day, someone said “Can you believe we’ve only known each other for 24 hours?” and we all laughed. There was a depth of connection that was hard to explain.

The next time we met,  it was the weekend of Storm Ciara. We’d been invited to Organic Lea, a food cooperative in Waltham Forest, to learn about how they were applying deep adaptation in their work. We also had the chance to spend some time on the land, helping prepare the space for a new apiary.  The physical work was simple: planting a willow hedge, wheelbarrowing mulch. We’d agreed to do this practise in silence, as a kind of meditation. The storm hit just as we started. Thunder raged and our willow hedge lashed in the wind, ludicrously fragile.  I’ll never forget one of the group who arched back and opened her arms to the storm, the rain coursing down her uplifted face. When we met in the outdoor learning classroom for our afternoon session – our clothes hanging from the rafters and steaming in the warmth! – all the conversations we were having about food security in an age of inherently unstable climate conditions had a new urgency. Our voices were literally drowned out by the bellowing storm.

And then, coronavirus. Lockdown meant we had to cancel a planned 2-day skill-share workshop. Challenges in people’s personal lives made it harder to stay focused on the programme. Loved ones fell ill. Parents had children on their hands. Work on resilience building  naturally  became much harder, in a context where everyone’s resilience was being tested as never before.  We moved our workshops onto zoom. Technical glitches meant some people fell off our calls and couldn’t get back on. None of the programme looked how we thought it was going to, just a few weeks before.  As a facilitator on the course,  it made me think of musical chairs.  If a leadership journey like this one is akin to the spiral of inner transformation (a common image used to describe spiritual or personal evolution) this wasn’t the spiral staircase of ascent, but a circle of chairs where one or two was removed at each stage of the process. With less energy and fewer resources to draw on, we had to pull more from within ourselves.  This pressure showed up in different peoples’ project work in different ways.

One participant, a community gardener and educator, had originally been working on a project inspired by spiritual ecology.  Joe had designed  a series of events where local people could connect with the land, learn about food growing, and explore what it means to relate to the land as sacred.  But since workshops were off-limits for the foreseeable future, he quickly adapted his vision.  In his day job he worked for a local primary school, teaching gardening skills and looking after their vegetable garden. With the produce he grew on this plot, he created an organic veg box scheme for all of the families who would be losing their access to free school meals due to coronavirus.

Polly had been looking for ways to invite people in her local village to have deep adaptation conversations. Instead, she found herself running off scores of ‘do you need help from your neighbours’ flyers and posting them through all of the letterboxes in her town. Out of the local shop she runs with her husband, she created a COVID community support hub. Her efforts earned her a spot on national television, and inspired many others across the country to follow suit.

Another participant had been working on a response to the Deep Adaptation paper that would create a new 4Rs framework to put climate justice to the fore. Post-coronavirus, she found herself drawn to volunteering at a local community centre in Camden that serves the Bangladeshi community – helping ensure they had the traditional foods they would need during Ramadan and Eid.

These are just a few examples. While not everyone’s project work changed so dramatically in response to the crisis, we were all called to re-examine what made sense in light of the new context. For some this meant considering the first R of deep adaptation, and thinking about what we needed to relinquish, even about our positive aspirations for change. And for others it meant  responding to whatever urgent need we were presented with in our community, and helping out in whatever way we could.

Ultimately what I take from this is something about the work of living our values while leaning into the stark reality of what is to come. Things will get harder, and they’ll get harder in ways we can’t predict or imagine. And as fast as we may work to cohere our communities and organisations around deeper values, as ingeniously as we may seek to adapt our societies to mitigate the impacts of climate emergency – even faster than that, all of the supports that we may take for granted will continue to crumble.  And so growing our resilience means adapting to this radical uncertainty.  It means learning to surf in the shifting sands running through the hourglass, counting out the time we have left before the last grains of our ‘business as usual’ tumble through the neck of the glass. Watching how the Radial Resilience participants rose to this challenge was, for me, the most moving and humbling part of the journey. 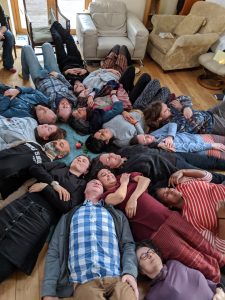 What stays with me from our last zoom meeting,  was the sense of  how different an ending this was than any we might have imagined. Many of us harked back to our initial retreat. The simple power of being in each other’s presence – suddenly it all seemed so much more precious than we had known at the time. It was odd to feel nostalgic for the basic ability to meet in person, something we’d had no idea we might lose only a few weeks ago.

Then one member of our group offered an exercise inviting us to be quiet and look – just really look – at the faces on gallery view on our screens. And for two minutes that’s all we did. It was so simple, yet it opened up a quality of presence and connection that surprised me. It was a tiny act of adaptation that created a sanctuary of care in the midst of our meeting, and made it feel as if we really were in each other’s presence again. It’s a moment I’ve come back to again and again. It imprinted the group in my heart, a seed of hope, that has nourished and sustained me ever since.

If you are interested in the themes in this blog do come to our upcoming retreat: Face reality, stand in solidarity, resilience and adaptation for times of social and ecological emergency, July 17th – 22nd, 2020, with an additional follow up session on August 1st. This retreat will involve zoom sessions and at-home solo practise time. Do join us!

Deep adaptation was a scientific paper that went viral in July 2018. Its explosive conclusion – that we are further down the road of climate breakdown than we feared – generated an overwhelming response from many in the scientific community and beyond, who felt relieved that at last a taboo had been broken. Alongside the science, author Jem Bendell laid out a framework for how people could talk about the future by exploring a framework called the 4 R’s: relinquishment, resilience, reconciliation and restoration. From this simple basis, a body of work has grown, shifting the conversation away from an old paradigm of stopping climate crisis, looking instead at how to create adaptive solutions for the impacts we can no longer avoid.  We recommend connecting on Professor Bendell’s various sites and platforms, including the Deep Adaptation Forum.