donate
Home⁄Blog⁄Uncategorized⁄Caring for Calais’ Forgotten: Harnessing the Power of Unity

Caring for Calais’ Forgotten: Harnessing the Power of Unity 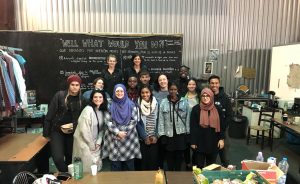 s a powerful Swahili proverb that says: “Unity is strength, division is weakness”. What a simple yet prominent thought! The concept of “strength in numbers” is something that most of us would definitely agree is a powerful positive way to approach life. However, despite being so seemingly obvious, unity is not always reflected in the current state of the world. This is unfortunately evident if we look at both the UK and further afield, across nations and continents.

In fact, what this incredibly powerful statement highlights is where we’re really at fault in the world. For if we were all to stand firm, united and in peace together – working across religious, cultural, economic, ethnic and national divides – by accepting and appreciating difference – we’d not only enrich our own lives and our understanding of the world’s singular yet diverse humanity, but we’d also be able to work better together to ensure that everyone was treated equally. We’d strive to see that no one went without whilst we live a life of relative privilege. What we enjoy as individuals, we’d ensure were not just the theoretical rights of each individual but the true realities of all living beings.

We’re all familiar with the concept of wanting for our brother or sister what we want for ourselves. The Golden Rule as we know it is fact the guiding principle for how to live one’s life across a range of faith traditions and is a global universal cultural concept appreciated also in secular traditions. Of course, if were to fully live through this “rule”, we’d be working each and every day to ensure that no one was left to suffer.

Many of us are able to go home to a warm home every night, are loved by friends and family and know that we’ll have food on the table every day. However, for millions of people here in the UK and around the world, this couldn’t be further from the truth. For countless men, women and children, life is a lot bleaker. Going to bed hungry, sleeping in the cold and without a home to call their own, it’s these essentials that they’re fighting to hold onto every single day for their lives. 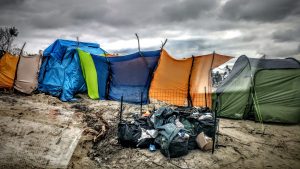 ho’ve been affected by war, natural disaster, religious, ethnic, cultural and political persecution and have been forced to flee their homes, the fight for survival is ever real.  Left mentally and physically traumatised by their experiences and with no economic or social security, they’re lacking the daily security that many of us often take for granted.

On top of this, refugees and asylum seekers are also faced with the ongoing vilification led by the media and individuals and groups who cannot stand to unite with these groups of people. Instead of seeing a sense of common humanity and duty to help, they live life through fear and indifference. As a result, vulnerable refugees are often forgotten, deemed “foreigners” and quite simply “someone else’s problem”. Unity is therefore definitely not reflected in the way the singular global community is coping with these issues.

Indeed, for the estimated 25.4 million refugees worldwide, struggle and indifference are a daily reality. For those not vehemently opposed to welcoming others, after the initial media furore however dies down when a crisis breaks out (not forgetting that the plight of many communities in fact not talked about), things “move on” and vulnerable are often forgotten. And this is exactly the story of Calais.

After the dismantlement of the “The Jungle” in October 2016, the camera crews left and the news reports died down. We’re now hearing very little about what’s really going on the ground but the reality is that the Jungle hasn’t disappeared. The “camp site” as we knew it has gone but the people remain. The struggles remain, the trauma remains and the needs of these vulnerable people remain as dire as ever.

One organisation on the ground working across Northern France – Help Refugees – estimates that there in fact at least 1,500 people living in forests in Northern France including the towns of Calais and Dunkirk. Even more shockingly, this figure includes at least 200 unaccompanied children. The ethnic origin of these individuals and families sadly goes back to worn-torn nations and areas afflicted by persecution including: Eritrea, Ethiopia, Afghanistan and Sudan.

Having travelled across the Mediterranean by boat from Libya and Turkey to Greece and across Eastern Europe to reach France, they’re now left in Limbo across Calais and Dunkirk. However, that’s the survivors. In total, Help Refuges estimates that 58,475 people have risked their lives to reach Europe by sea with 2,700 feared to have lost their lives in these waters.

Back on dry land, these men, women and children are living outside in tents, reliant upon the goodwill of charitable organisations providing food, clothing, firewood and hygiene products and additional legal assistance, internet and charging facilities. Within these organisations, people are coming together day in, day out to ensure that these refugees are not forgotten. 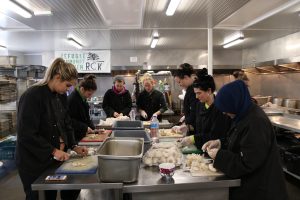 It is this sense of common humanity and the need to help others in crisis that has guided the Sacred Activism programme at St. Ethelburga’s. This October I was incredibly fortunate to go on a five-day trip with a fantastic group of interfaith activists as part of this programme to volunteer for Help Refugees and Refugee Community Kitchen. As a diverse group, we were able to put our common values of charity and compassion into practice and the best bit is that we were able to learn about each other (and ourselves) at the same time!

Each day we’d go to the warehouse and kitchen run by these two organisations to help prepare the 2,000 meals provided daily (no mean feat!), repair clothing and help break down wooden pallets to provide some form of sustenance, protection and warmth for refugee men, women and children in Calais and Dunkirk. We were also all fortunate to be able to go out on distribution and to meet a range of refugees and this was for all of us I’m sure, the most profound moment of the trip.

Serving coconut veg curry to Kurdish men, elderly women, pregnant women and young children really brought home the reality of the situation. When I looked into the eyes of one young Kurdish girl, I saw pain – a pain I could empathise with but having never been a refugee myself, one which I could never truly understand.

For the volunteers who’d spent seven months – even up to two years – in Northern France, they had a much deeper understanding of the harsh realities on the ground. As a result, they too described how every three months they take a short period of leave – if nothing but for their own emotional wellbeing. What the refugees are going through themselves, can only be nothing short of a mix of anguish, fear, confusion, frustration, sadness and heartache, mixed with hope and the longing for a sense of security and stability.

However, whilst we can take a break and “escape” life in Calais, for these vulnerable refugees, there is no break. Day after day, they live with the hope that a better future will come. For some it may arrive, for others that hope is brutally cut short. Indeed, whilst were in Calais a memorial service was held for an individual who had lost his life at sea, whilst trying to reach the UK. What we must crucially remember is that this individual could easily have been our brother, our husband, our father, our son or our nephew – were it not for the fact that we instead are here safe at home, in our communities and in relative luxury.

Indeed, it is this sense of common humanity that is driving the incredible work on the ground and which must (and can only be) be the long-term 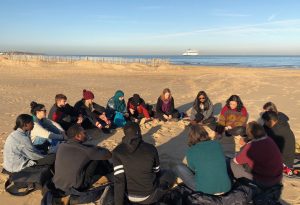 sustainable answer to the “refugee crisis”. In the warehouse and within our group, despite the different nationalities, the different cultural backgrounds and the different faith traditions and beliefs, we shared one key commonality: to the desire to do good, to help others and to make a difference. I myself truly felt the inclusivity there. I was one of only a few hijabi Muslim women in the group – and in the warehouse as a whole  – yet I felt just as valued as every other team member there.  I saw and felt the effect and it was truly heartwarming.

Reflecting on the trip, it is this commonality, this sense of unity and this remarkable sense of teamwork which builds strength. And this strength is the power that has brought 20,000 volunteers to the Help Refugees warehouse since 2015 and which – despite all the odds – is enabling them to provide 2,000 meals a day to refugees in need who are holding on to the hope of a better future in times of dire hardship.

As the proverb says, untied we are stronger – divided we are weaker. So, let’s walk through life with this proverb on the tip of our tongues and in our thoughts, deeds and actions. Only then, can real change be made. Only then can refugees live the futures they deserve and only then can the conflict, injustice and suffering end.

I’d like to thank St. Ethelburga’s for such an amazing experience and the incredible support offered at each and every stage of our journey. Thank you for enabling me to take part in such a fantastic programme!  © Elizabeth Arif-Fear, Croydon – www.voiceofsalam.com

Photo credits in sequence as they appear:

On the beach reflecting on the busy few days we’d spent helping refugees in Calais – just a stone’s throw across the sea from the UK (Image: St. Ethelburga’s Centre for Reconciliation and Peace)

Jo is Project Manager of Refugee Allies at St Ethelburga's.  She collaborates with innovative organisations to bring refugee and non-refugee together building empathy and understanding one conversation and one action, at a time. She hosts and co-ordinates inclusion events and leads on the design, development and coordination of Act: Speak: Inspire, a programme of volunteering in refugee camps in Europe to cultivate allyship and stimulate action within each volunteer's home community.  Jo has worked in the non-profit sector for over twenty years.  She holds a BA (Hons) in Education and a Diploma in group facilitation, conflict resolution and counselling (NAOS).