donate
Home⁄Events⁄Trickster, monster, other: new and ancient ways of seeing in the dark (online event)

Trickster, monster, other: new and ancient ways of seeing in the dark (online event)

Join Pat McCabe and Bayo Akomolafe for a conversation that upends our thinking about the monstrous, the chaotic, and the dark. What can indigenous traditions teach us about clear-seeing in times when darkness and chaos are on the rise? What ancient wisdoms can we draw upon, to grow our resilience to live in the heart of the storm?

‘Monstrosity can serve as a cultural means to examine ourselves. To meet ourselves as if for the first time.’ Bayo Akomolafe

Our world seems to be hurtling full-pelt towards chaos. Many cultures have a name for the more-than-human force that brings chaos and destruction. The Native American Trickster is one example. Trickster doesn’t follow reason, and can’t be overcome with logic. We need a wild, canny intelligence to track the trickster’s ways. Join Pat McCabe and Bayo Akomolafe for a conversation that asks – How can we grow an intelligence that’s raw and cunning enough to meet chaos on its own terms? And how might such untamed intelligence help us to better understand – and heal – racial injustice? 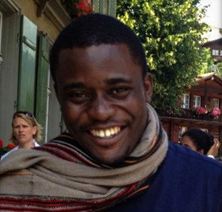 Bayo Akomolafe challenges how we instinctively recoil from what feels other, encouraging us instead to show ‘hospitality to the monstrous—where we must now go to bring forward a different vision of race.’ Bayo names the way black and brown bodies have carried the image of monster to a dominant white culture. And he also recovers, from within his own Yoruba tradition and elsewhere, a sacred history that knows monstrosity as a divine force – a place of immense power and generative capacity. For him, the work of decolonisation calls us to travel into the wilderness of everything that we have othered, and allow ourselves to be undone by it. 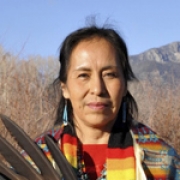 Pat McCabe, or Woman Stands Shining, is a Native American elder whose work explores the meeting point between ceremony and deep social healing. Pat was born into the Dine (Navajo) nation, and has also received a spiritual training with the Lakota tradition. She travels and teaches widely on the indigenous science of Thriving Life. Her work seeks to revivify human knowledge and meaning-making, by restoring the holistic knowledge practices known to indigenous people: ‘It is imperative that we remember, and guide the generations coming up behind us to know, that intellectual observation and explanation, are not in any way to be confused with participation and embodiment of our way of life and prayer. To me this is a mirror of the danger that we have fallen into in the context of scientific inquiry. To be the disembodied intellect and observer rather than passionate participant, and harmonious co-Creator, has led to a great misunderstanding of who we are, where we are, and how it is. To the detriment of All.’

Do join us for what is sure to be a powerful conversation about race, decolonisation and the climate crisis!

This is the third event in our Radical Resilience series, a new strand of work that asks, how can we live a whole-hearted response amidst the tumult of our times?

More about the speakers:

Bayo Akomolafe (Ph.D.) is Chief Curator and Executive Director of The Emergence Network. Author, lecturer, speaker, father, and rogue planet saved by the gravitational pull of his wife Ej, Bayo hopes to inspire a diffractive network of sharing within an ethos of new responsivity – a slowing down, an ethics of entanglement, an activism of inquiry, a ‘politics of surprise’. Born into a Yoruba family, Bayo graduated summa cum laude in psychology in 2006 at Covenant University (Nigeria), and then was invited to take up a lecturing position. Largely nurtured and trained in a world that increasingly fell short of his deepest desires for justice, Bayo conducted doctoral research into Yoruba indigenous healing systems as part of his inner struggle to regain a sense of rootedness to his community. He has been speaking about his experiences around the world since those moments back in 2011. Bayo understands he is on a shared decolonial journey with his family to live a small, intense life. He often refuses to share pictures of himself that do not include his wife, Ej, who is (everyone can assure you) the more interesting part of their entanglement. He is an ecstatic (and often exhausted, but grateful) father to Alethea Aanya and Kyah Jayden.

Woman Stands Shining, Pat McCabe, has the honour of being of the Dine (Navajo) Nation. She brings the understanding of Indigenous ways of knowing into discussion and inquiry on Sustainability. She carries the foundation of Beauty and Spirit into places where it has been kept out. Pat is an active participant in Indigenous Peoples gatherings worldwide including Chile, Belgium, Ecuador, Peru, Mexico and Bali. She has worked with the International Center for Cultural Studies in India and with Sarvodaya with Dr. A.T. Ariyaratne in Sri Lanka, as well as with organizations and gatherings in the U.S. She has been a cultural consultant to the Pachamama Alliance, presenting at the 2013and 2014 National Bioneers Conference, and presenting on “The Feminine Design and Sustainability” in the U.S. and Internationally.
She first came to the UK in 2014, as an invited guest to the New Story Summit at Findhorn Community, Scotland. She also visited Devon that year, and returned to lead sessions of the Becoming Indigenous course at Schumacher College in 2015. https://thrivinglife.weebly.com/

This event is generously supported by:

Sorry, there are no upcoming events unfortunately. Do keep checking back though as we'll be adding more in the future.